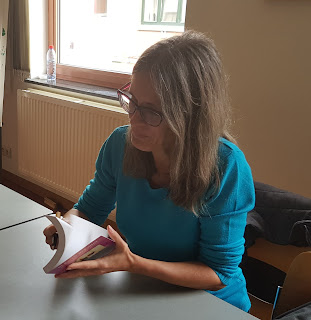 The conversation, led by Helen MacEwan and Myriam Campinaire, was like Nathalie’s novel, a very interesting blend of the past and the present. The lively exchange offered insights not only on Charlotte’s life and experience in Brussels, but also on life in the Belgian capital – all the while playing along the borders of fact and fiction.


Here are some highlights of the conversation:

Helen: The title of Nathalie’s book is already quite interesting. Does anyone know the reference?
Patsy Stoneman: Well, in one of Charlotte’s letters, she expresses her desire for wings and flying.
Nathalie: Yes. And we have chosen this title also because there are many characters in the novel who are female. So it’s a wish for wings because of the frustration of being isolated in a small village for Charlotte. But it’s also a wish for wings by many of the female characters in the novel that would wish for another life with more freedom than they likely had in the 19th-century Brussels. So it’s broader.

Myriam: In the book, there’s a lot about Brussels in the 1840s. What aspects did you most enjoy describing in this novel?
Nathalie: I liked to show how multicultural Brussels has always been. And how it was attractive to come to Brussels for people from everywhere in Europe already in the 19th century but even before. It’s very easy to arrive in Brussels. At every period, we have had people coming from everywhere and settling in Brussels. I liked to show how many people arrived, especially from England, because they liked the city; the life in Brussels was not so expensive; and they enjoyed the cultural atmosphere, all the concerts and exhibitions. I liked to show that. 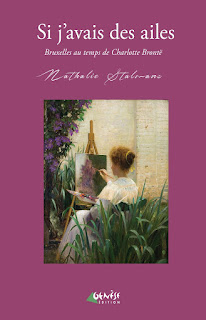 Myriam: It’s of course difficult to combine your work as a teacher, as a mother and as a writer – do you have a certain work discipline, I mean getting up every day at 5 o’clock and writing for two hours or something like that?
Nathalie: No, not that. But I need to write; so I need to find the time for writing. And when I’m asked: How do you find the time? It’s a bit like I could ask you how do you find the time for sleeping. For me, it’s just a need. And if I don’t take the time for writing, I will start to be more aggressive, more emotional, not really myself. So I pay attention to really have that time, some hours a week at least for writing. Whatever happens in my life, Wednesday afternoon is for writing.

Myriam: The story is told by several narrators; some of the narrators are real people, and some of them are imaginary. Why did you choose to tell the story in this way?
Nathalie: In terms of structure, first, as I don’t have much time for writing, I like usually to design my novels in short chapters around one figure, because it’s just easier when you don’t have much time to come back to the writing. It’s in small sections, and for me it’s easier. Also, it’s easier nowadays for people to read by small sections and not to face big chapters.
About the figures I’ve chosen – I wanted to show different aspects of Brussels and Charlotte, and for that I needed a pupil to show what kind of teacher Charlotte has been. I used different characters to show Charlotte in different ways.

Helen: How good was Charlotte’s French in your opinion?
Nathalie: They both were good at writing. We don’t know about talking.

Myriam: About the footnotes, I guess they are for potential French readers because there are several occurrences of footnotes explaining things I suppose a Belgian would say.
Nathalie: For me, it was also important to use Belgian French words, like septante and nonante, to give a certain feeling. My publisher said okay, but she wanted me to explain it with footnotes.

Servant Manke Née describes the area around the Pensionnat Heger:
The Pensionnat stands in the middle of rue Isabelle. When you leave the school, if you turn right, you go up towards the Place Royale; if you turn left, you go down to the collegiate church of Sainte-Gudule. I went straight ahead and climbed the four flights of wide stone steps that lead to the Royal Park.
At the top of the steps is the statue of General Belliard. He is looking towards the park, which probably explains his discontented air: it was there, while taking a walk, that he died of apoplexy.
I turn my back on the General and recover my breath. I am looking down over the city. Smoke rises from the chimneys of the houses on rue Isabelle below. The Pensionnat lies peacefully. Behind it, a tight maze of narrow streets, compact houses and gardens extends to the Grand Place.
-- Translation of passage from Si j’avais des ailes

Nathalie Stalmans is a historian and history teacher living in Belgium. Her previous novels include Finis Terrae and Le vent du boulet, set in the 17th and 18th centuries, respectively, which blend real and imaginary elements in stories about the inhabitants of a real house in Rue Neuve in Brussels.

Note: Some parts of the conversation have been edited for clarity.