‘There was no possibility of visiting the Parsonage that day ... So, Reader, we met on Zoom.’ The Brontë Parsonage has now re-opened, but because of COVID-19 the Brontë Society’s September 2020 conference in Scarborough in honour of Anne Brontë has had to be postponed to next year. However, on 4 September 2020, I attended a virtual conference organised by Claire O’Callaghan of Loughborough University and Sarah Fanning of Mount Allison University, one purpose of which was to raise funds for the Society – which has of course been hit hard by COVID. 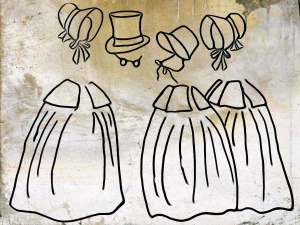 I had participated in Zoom literary events before, for example recent meetings with writers organised by the Brontë Society. However, this was my first experience of a Zoom event lasting many hours and allowing for ‘parallel panels’ of several talks being given simultaneously. The technicalities proved to be straightforward – there was a separate link for each panel and you could drop in and out of different talks being held at the same time. (There was also a Slack chat room where you could chat to other delegates and ask questions of the speakers.)

One of my previous experiences of parallel panels was at a Charlotte Brontë conference in 2016. It was held at Chawton House and as I wanted to hear all the speakers (being on the lookout for people to invite to talk to us in Brussels), I found myself running back and forth between two rooms located rather far apart in the rambling Elizabethan house, sometimes getting lost on the way. It proved easier on Zoom!

No virtual conference can reproduce the atmosphere of a venue such as Chawton, but there was a varied programme to enjoy, spread over more than 12 hours (9.15 to 20.15 British time). Videos/texts of some of the short (15-minute) papers had been sent to delegates in advance so that the time on the day could be used for questions.

The conference kicked off with a keynote lecture by costume historian Eleanor Haughton, who told us about Charlotte Brontë’s slippers! One of the more curious items in the Parsonage is a pair of native American beaded leather moccasins thought to have belonged to Charlotte, who is believed to have left them behind in the Scarborough guest house where she accompanied Anne during Anne’s last days. They were donated to the Brontë Society in 1983 and are thought to have been sent to Charlotte as a present by her American publishers. Charlotte read James Fenimore Cooper’s The Last of the Mohicans and Eleanor Haughton looked at the book’s possible influence on her imagination, particularly in Shirley.

I was particularly interested in the other keynote talk, in which graphic novelist Isabel Greenberg presented her new book Glass Town, since Isabel will be speaking to our Group in April 2021. The book blends the Brontës’ invented world of Angria and their life story, for example, Charlotte’s time as a teacher at Roe Head School, torn between her real and imaginary worlds. We were able to see some of the book’s illustrations and hear about how it was researched and conceived. I look forward very much to hearing Isabel give a more expanded presentation to the Brussels Group next April. 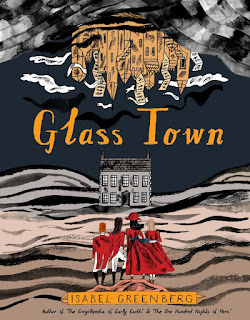 Another highlight for me was an interview with screenwriter Sandy Welch, who has adapted many classic serials for the BBC including Jane Eyre (2006) with Ruth Wilson and Toby Stephens, North and South (2204) and Emma (2009). She told us that her own love for the classics was born out of television adaptations in the good old days when it was common for the BBC to create more than twenty half-hour episodes – ample time to do the books justice. She said her own aim, within today’s time constrictions for adaptations, is to be faithful to what she sees as the author’s intention rather than bringing a personal/twenty-first century agenda. Thus, she portrays Rochester positively and does not have a particular interest in showing Bertha Mason rather than Rochester to be the victim in their marriage, something commonly done in contemporary criticism, as she doesn’t see this as Charlotte’s intention.

There were also interviews with Sally Wainright, who wrote and directed the two-hour BBC drama To Walk Invisible: The Brontë Sisters, and with the actor Adam Nagaitis who played Branwell in that film. He reflected interestingly on how he approached the role of Branwell as he was in his last years of alcoholism and decline.

The short talks in the parallel panels were too numerous to enumerate here. Speakers included Emma Butcher on The Brontës and War. Emma, a past speaker to our Group, specialises in the Brontë juvenilia and how they were influenced by the Napoleonic War. There were speakers from various European countries including Germany, Italy, Poland, Spain and Ukraine. Subjects included (to pick out just a few – I didn’t have time to sample everything on offer): Anne Brontë Reimagined: A View from the 21st Century; the Brontës’ Cornish roots through their mother Maria Branwell; British and German Romanticism: The Brontës and Robert Schumann; ‘A Flattering Malady’: The Brontës’ ‘Romantic Consumption’; the Brontës’ lives re-visited in 21st-century adaptations; a 1971 Spanish adaptation of Jane Eyre.

Just to mention a few other events, there was a round table of women authors whose works have been inspired by the Brontës’ lives and fiction; the Brontë Society’s Ann Dinsdale and Rebecca Yorke told us about life working at the Parsonage; and for a breath of virtual fresh air, writer Michael Stewart invited us outdoors in a film about his ‘Brontë Stones’ project. This took us across the moors to Haworth from the village of Thornton, the Brontë birthplace. To celebrate the sisters’ bicentenaries, a stone has been dedicated to each of them carved with poems by well-known women poets and by the singer and songwriter Kate Bush, in Thornton, Haworth and the Haworth moors. 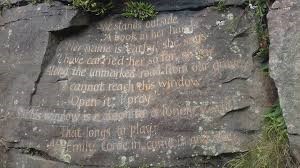 The Emily Brontë stone on the moors overlooking Haworth
(carved with a poem by Kate Bush).