The Brussels Brontë Group is a uniquely international one, bringing together members from all over Europe who have come to live and work in the ‘capital of Europe’. Talks by members provide an opportunity for information and insights from different national perspectives.

In a presentation on 23 March called ‘The Novel that made Charlotte Brontë Fear Plagiarism Charges – Meet The Neighbours by Fredrika Bremer’, Swedish lawyer Paulina Carlin explored links between Charlotte Brontë and a Swedish contemporary of Charlotte’s, the novelist and reformer Fredrika Bremer. Today Bremer is better known in Sweden as a feminist than for her novels, but in her day they were extremely popular in English translation.

Her readers included the Brontë sisters, Charlotte for example telling a correspondent in 1849 that ‘Anne is engaged with one of Frederika Bremer’s tales’.The subject of Paulina’s talk was suggested by a passage in Elizabeth Gaskell’s Life of Charlotte Brontë:

[Charlotte] said that, when she read The Neighbours, she thought every one would fancy that she must have taken her conception of Jane Eyre’s character from that of ‘Francesca’, the narrator of Miss Bremer’s story. For my own part, I cannot see the slightest resemblance between the two characters, and so I told her; but she persisted in saying that Francesca was Jane Eyre married to a good-natured ‘Bear’ of a Swedish surgeon.

Gaskell, who met Fredrika on the latter’s visit to Britain in 1851, described her as ‘a quaint droll little lady’, ‘very plain, and rather untidy; but very kind and genial’. Both Charlotte and Fredrika were plain and small in stature, and the points in common don’t end with their physical appearance. Both were forceful in their views and concerned with the place of single women in society.

It’s hardly surprising that Bremer became a feminist after her stifling upbringing in a wealthy bourgeois family. Paulina told us Bremer was kept on a starvation diet by her mother, who was afraid she would grow too tall, which would be ‘unladylike’. She wasn’t allowed to go for walks as this, too, was ‘unladylike’.

Like Charlotte, Fredrika turned down several proposals of marriage. She fought for the rights of single women and her 1850s novel Hertha was instrumental in a successful campaign that saw unmarried women in Sweden granted legal majority at the age of 25. The Fredrika Bremer Association, set up in 1884 and still going strong today, is the oldest women’s rights organisation in Sweden.

Paulina went on to compare Jane Eyre (1847) and the novel in which Charlotte Brontë thought readers would see similarities, Bremer’s The Neighbours (published in English translation in 1842). 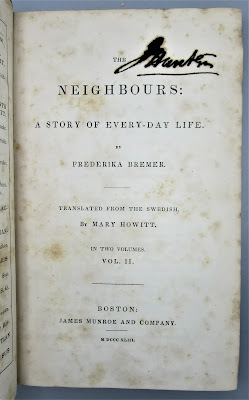 There are two contrasting women characters in The Neighbours: Francesca, a plain, clever, strong-minded woman married to a man she calls ‘Bear’, 20 years her senior (the same age gap as between Jane and Rochester), and the insipid Serena, who is romantically involved with Bear’s brother, Bruno. Francesca is fond of her husband but didn’t marry for love, and the love story in the novel centres around Bruno and Serena. Paulina pointed out that Charlotte had the ‘brilliant idea’ of making the main character a plain, strong, interesting woman and focusing on her love story rather than giving the romantic interest to an ‘angel in the house’ type heroine.

Paulina found parallels in the bantering relationship between the partners in the couples in both novels (Jane/Rochester and Francesca/Bear), with Francesca teasing her husband and pointing out his faults. Paulina also picked out certain themes that run through the two novels, examples being the ‘madwoman in the attic’ and references to colonies that used slave labour.

Some of these themes centre around Bruno and his Jewish former mistress, Hagar. The fiery-tempered Bruno, rather like Rochester, returns home after years of dissipation, having been estranged from his family. Like Rochester he has money made through the slave trade. And like Rochester he is redeemed by the love of a good woman (Serena). Hagar, in a plot development reminiscent of Bertha Mason, attempts to kill the woman Bruno loves but ends up dying herself, leaving Bruno and Serena free to marry and live happily ever after.

In the past, Bremer has sometimes been compared with Jane Austen rather than Charlotte Brontë. She has been called ‘the Swedish Jane Austen’ because her novels deal with country and domestic life. Her novels have not borne out the comparison but although she is little read today, she is a personality well worth getting to know. Most if not all of us had missed the references to her in Charlotte and Gaskell’s correspondence and Gaskell’s Life of Charlotte Brontë, and Paulina took us on an interesting journey as we explored this Swedish connection.