During Isabel Greenberg’s talk to the Brussels Brontë Group about her graphic novel Glass Town, one of the members asked her a question about whether she thought Glass Town would qualify as “fanfiction” of the Brontë works.

The jury is still out on where to draw the line on what is fanfiction and what isn’t, but the question made me reflect about why I related so much to this book; it has the spirit of fanfiction in it – especially if we think about the young Brontë siblings as early fanfiction writers.

Thinking of Charlotte Brontë and her siblings as fanfiction writers is not a new idea to me – a little over a year ago, I gave a presentation to the Brussels Brontë Group about the Brontës and Fanfiction. However, Greenberg’s text and illustrations were able to visually express the joy I find in reading fanfiction as well as the all-consuming, single-minded obsession by which I can sometimes find myself possessed when in the midst of a fanfiction binge in a way I hadn’t seen before. Two scenes from the graphic novel stood out to me as particularly illustrative.

The first scene that reminds me of fanfiction is the one where Glass Town is being constructed. 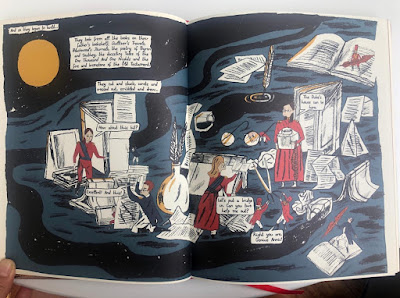 The text mentions that the siblings “cut and struck, wrote and crossed out, scribbled and drew.” Greenberg conveys the excitement and masterfulness of worldbuilding by depicting the Brontë siblings, dressed as the Genii world creators they envisioned themselves as, amidst their paper and ink creation, literally constructing buildings from papers they’ve torn out of books from their father’s bookshelf.

Showing the Brontës as giants in their world, constructing, and moving book-buildings around underlines the extent to which they were immersed in their world, and it also reminded me of the single-minded obsession which can often possess fanfiction readers and writers; they are living in another world. Additionally, there is the construction material itself and the very physical way in which Greenberg has drawn them are manipulating it.

The text mentions that the siblings took “Gulliver’s Travels, Blackwoods Journals, the poetry of Byron and Southey, the dazzling tales of One Thousand and One Nights, and the fire and brimstone of the Old Testament,” and Greenberg depicts those works as the building blocks of Glass Town. But we also see the Brontës making it their own: Emily is tearing out pages, Anne is combining two or more stories to make a “bridge,” Branwell is applying new paper facades to older stacks of books, and Charlotte is searching for how the house of her own character can fit amongst the literary landscape which she knows so far. This idea of taking material from a source and reshaping it into something new is also at the heart of fanfiction.

The other scene that evoked the spirit of fanfiction to me was when Charlotte is teaching as her day job but spending most of her time absorbed in the fictional realm of Glass Town. One night, Charlotte has been writing away feverishly the story of what transpires between Mary Percy and Quashia Quamina when she is interrupted by Miss Wooler. 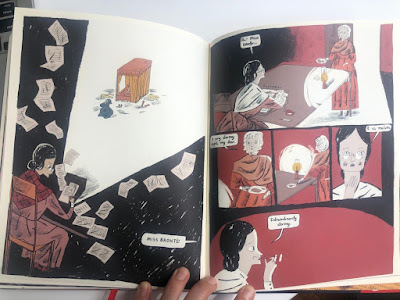 Two aspects of this scene remind me of modern fanfiction writers. Firstly, Charlotte Brontë has become so absorbed in her craft that she is distancing herself from her reality. When Miss Wooler walks in and interrupts her, she is shaken and has to readjust. This is similar to the experience of many fanfiction readers and writers when they emerge from a binge reading or writing session.

Aside from these two scenes, there are many other beautiful illustrations and visual metaphors linking the Brontës with the world of fantasy. I encourage everyone – whether they choose to view this work through the lens of fanfiction or not – to discover it for themselves!