Isabel Greenberg on the Brontës and their fantasy world

Isabel Greenberg took the Brussels Brontë Group on a fascinating journey through how she created her inspired graphic novel Glass Town, an exploration of the young Brontës’ fantasy world that mixes fiction and memoir. 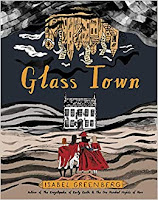 Her book is an incredible blend of Brontë biography and the imaginary realm that the siblings created as children in the first half of the nineteenth century – a very apt approach for a work about the young Brontës, who lived so much in their fantasy world as children.

Isabel, an award-winning graphic designer and illustrator, was just as excited about how the Brontë children created their fantasy world as by the imaginary world itself.

While she read the Brontë novels as a child, Isabel found the inspiration for her graphic novel only much later, after she discovered the Brontë juvenilia when she read the selections in Tales of Glass Town, Angria, and Gondal, edited by Christine Alexander.

In her talk on May 6, Isabel said she was drawn to the level of detail in the juvenile sagas, calling them an amazingly modern example of “worldbuilding” – a modern-day term applied to fantasy worlds like Game of Thrones and Lord of the Rings. The Brontë siblings’ youthful writings “must be the first and greatest worldbuilding of its kind on this scale,” Isabel said. “When I read the juvenilia, I felt very strongly that it had to be a graphic novel,” she said. 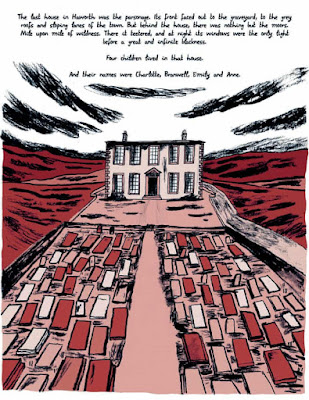 She said she felt jealous of the Brontës being so immersed in their fantasy world, more than Isabel ever could, because real life keeps interrupting her.

But she also found the youthful writings “huge, contradictory and confusing,” and therefore difficult to adapt to a graphic novel. She had to be selective and simplify.

She made three visits to the Parsonage in Haworth in researching her book, including one trip in February when the weather could certainly be described as “wuthering.” Isabel said she got a glimpse of “their reality ... bleak and cold and grey.” It included “the horizontal rain of Yorkshire,” she said.

It was essential for her to see the Brontës’ environment, as their imaginary world grew out of that. 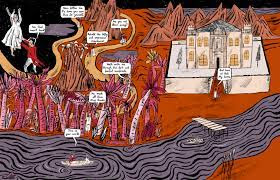 But Charlotte is the main protagonist of Glass Town, because Isabel found it so poignant and sad that the Brontës created their imaginary world as a foursome, but Charlotte ended up alone.

Isabel’s favourite character while she was writing the book, though, was Charles Wellesley, one of the most prominent figures in the Glass Town and Angrian stories. Charlotte reminisces with Wellesley about Glass Town when she’s left alone after her siblings’ deaths. After Charlotte has abandoned her fantasy world as an adult, Wellesley tries to persuade her to return to Glass Town, as it has fallen into disrepair. An excerpt from the book is here. 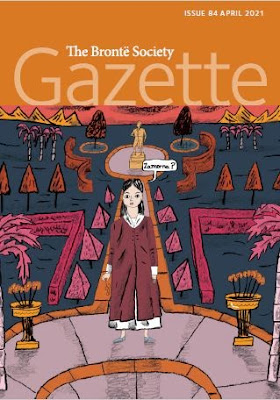 Isabel was moved by the way the Parsonage has retained its magic. Most of the scenes in Glass Town are set in the dining room with the famous table where the Brontës wrote and discussed their stories.

Isabel said that in a graphic novel you can do things you can’t in a written text -- like using maps to help tell the story, something that she employs numerous times in the book.

One disappointment for our group is that the sisters’ time in Brussels isn’t included. Isabel also had to leave out the Gondal world created by Emily and Anne, as she dealt with the huge amount of material in the juvenilia.

But she is preparing an exhibition at the Brontë Parsonage Museum called “Gondals arise,” which includes some material that didn't make it into Glass Town. You will be able to view the exhibition once the Parsonage re-opens, which is currently scheduled for May 19. 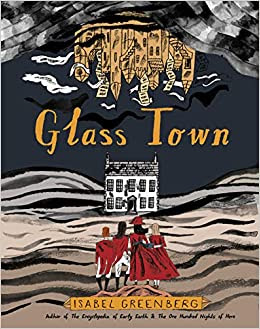