Talk by Dinah Birch: Education and the Brontës

Our 2021-22 season of talks got off to a magnificent start with a Zoom talk by Dinah Birch on 14 October titled Education and the Brontë family: Principles and Practice. 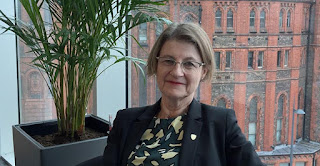 Dinah Birch is Professor of English Literature at the University of Liverpool and has written extensively both on the Brontës and nineteenth-century education. Examples are her book Our Victorian Education and numerous articles and book chapters on subjects such as The Brontës and Nineteenth-century Educational Ideals, and Education in Victorian Literature. (Many of us also know her as a broadcaster, participating in discussions of the Brontës and other Victorian novelists in programmes such as BBC Radio 4’s In Our Time.)
Education and the Brontë family proved to be a rich topic for exploration, with Dinah’s talk covering a great deal of ground.
She began by looking at some aims of Victorian education: furthering social cohesion, conformity, discipline, acceptance of one’s place in the social hierarchy; providing the means of earning a living and developing an effective workforce.
She also looked at ideas about women’s education. Reformers such as Hannah Moore pointed out that women were expected to be virtuous, setting the moral tone as wives and mothers, yet were poorly educated. Reformers urged the need to improve education for women as future educators, whether in the home bringing up their own children, or as teachers outside it.
Dinah went on to examine each of the Brontës’ attitudes to education, pointing out that they had different concerns and approaches. She started with Patrick, whose determination to educate himself enabled his social ascent from humble origins to his position as clergyman and educator (he met his wife Maria Branwell while examining at a school where her uncle was headmaster). Under his liberal direction, the Parsonage provided stimulation for both the intellect and the imagination, with the children being encouraged to read widely and engage with the topics of the day.
Dinah had a lot to say about Charlotte Brontë and education, for example Charlotte’s romanticising of teacher-pupil relationships both in real life, with her Brussels tutor Heger, and in her novels. Charlotte’s exploration of this relationship played a major role in making her the mature novelist she became.
The importance of education in Anne’s novels is evident, and Dinah looked at Anne’s educational and religious ideas in both her novels, pointing out that she was the sibling who most thoroughly assimilated the Evangelical ideals of the Parsonage. Dinah also had interesting things to say about education in Emily’s Wuthering Heights, for example about how the characters are formed by their childhood experiences (outside the classroom rather than in it). Wuthering Heights of course has a teacher-pupil relationship just as Charlotte’s novels do, when Catherine becomes the teacher of Hareton, deprived by Heathcliff of any kind of formal education.
Dinah highlighted the tensions and ambivalence in the Brontë siblings’ attitude to education. On the one hand they recognised its importance in enabling them to achieve social status and financial security and independence; on the other, they had imbibed from Romantic literature ideals about self-determination and an unwillingness to conform. For them, the imagination and the solitary education of the self would always be the most important educational experience.
Helen MacEwan
Posted by JH at Monday, October 18, 2021