Simon Marsden, a senior lecturer at Liverpool University and author of Emily Brontë and the Religious Imagination, has in the past explored Gothic elements in Emily Brontë’s work rather than Charlotte’s. At the Brontë Society’s 2018 Emily Brontë conference to celebrate her bicentenary, he spoke on ‘Emily Brontë and Spectrality’.
But for his Zoom talk to the Brussels Brontë Group on 16 March 2022, Simon turned to Charlotte Brontë and Villette, examining Gothic aspects of Charlotte’s last novel and the book’s relationship to early nineteenth-century Gothic literature. 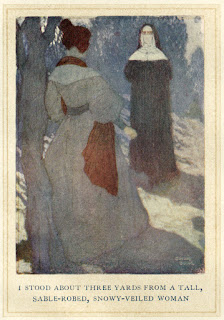 Introducing the theme, he said that of course the Gothic is more readily associated with Jane Eyre than Villette.
But in Villette, which incorporates the Gothic into narrative realism, Charlotte engages with it in different and more sophiticated ways, though she includes traditional Gothic tropes such as the Catholic European setting and an isolated heroine.
Certain scenes in Villette have obvious elements of the Gothic and spectrality, in particular those in which Lucy Snowe sees the ghostly nun. But Simon also brought others to our attention where the Gothic theme is less obvious, such as Madame Beck’s night-time visit to the nursery dressed in white (the spectral colour in literature of the period), or Lucy’s experience of waking in the Brettons’ house to find herself surrounded by familiar objects from her past in an unfamiliar setting – an example of the ‘uncanny’ or ‘unhomely’ – the familiar made strange.
In his discussion of Lucy’s sightings of the nun, supposedly the ghost of a young novice buried for a sin in the days when the Pensionnat was a convent, Simon explored the idea of hauntings. Although Lucy appears to be dismissive about superstitions such as this legend of a nun walled up alive, and although by the end of the novel the ghostly sightings turn out to have a mundane explanation, Simon argued that this does not undermine the novel’s more general theme of the presence of the past in the present.
He said that all Charlotte’s novels invoke the supernatural (in the form of apparitions, warnings, dreams) but that this aspect is balanced and restrained by her more rational self – the heart restrained by the head. He ended with some reflections on how both heart and head, the imagination as well as reason, play a part in the perception of reality in its totality.
His talk was followed by a fruitful question and answer session exploring issues such as Charlotte’s relationship with Catholicism – Lucy seems to be attracted as well as repelled by it – and the sense of the past in places said to be ‘haunted’, with the suggestion that the walls between the present and the past, the living and the dead, are not as secure as we may think.
Helen MacEwan
Posted by JH at Saturday, March 19, 2022