The Brussels Brontë Group on Saturday 30 April 2022 could finally get together in a real-life venue instead of on Zoom. What a relief to see each other again, talk to friends, have a coffee and a lovely piece of cake, finally some sort of normality is getting back into our lives.

On the programme we had two talks with a Brussels theme. Very appropriate indeed. 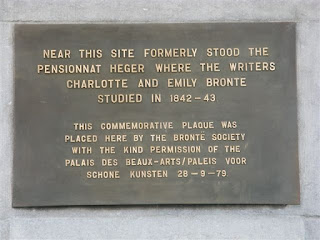 The first talk was given by Monica Kendall: “Do you like the truth? The Brontës and my family”. Monica wrote a book about her ancestors, Evan and Eliza Jenkins and their family, who were in Brussels at the time that Charlotte and Emily were studying at the Pensionnat Heger. Her book is called: “Lies and the Brontës: The Quest for the Jenkins Family”. A very intriguing title!

About ten years ago, she became aware of the link between her great great grandparents and the Brontës and started her research, at first naively thinking that by reading the Brontë biographies she would learn more about her ancestors. She referred, among others, to the biographies of Elizabeth Gaskell, Ellis Chadwick, Juliet Barker, Rebecca Fraser and Claire Harman. To her great astonishment, she found that some of the biographies contain incorrect data, fabrications, fiction, etc., which she blamed on poor research, a desire for novelty and inadequate checking of information in prior biographies.

She decided then and there to take up the battle and set the record straight, at least as far as her ancestors were concerned. Her research took seven years. She joked that she selected the (rather strong) word LIES for her title because this was the word that would fit best on the spine of the book.

Some of the “lies” that she uncovered were:

- Mrs. Heger would not have “accompanied” Charlotte to Ostend (being a mother of five children and it being a winter day)

Other connections between the Brontë family and the Jenkins family were referred to as well, e.g. David Jenkins (brother of Evan) was a close colleague of Rev. Patrick Brontë in Yorkshire.

I enjoyed this talk very much. It was fascinating to hear that so much false information about the Brontës and the Jenkins’ family has been published over the years, information we Brontë fans believed to be true.

Monica’s book is full of interesting informative nuggets and connections. You will have to read it for yourself to find them all. As it is a very heavy book to carry around, I intend to read it during my holidays and not on the “train” to work!😉

The second talk on Saturday was by Derek Blyth: “A Brussels Brontë ramble”.

Derek is a well-known columnist, journalist and guide-book writer. I remember him from a Brontë walk that he led in the first years of the BBG. He does not claim to be a Brontë expert but knows a lot about Brussels and Belgium as he is a long-standing Brussels resident. His focus was therefore on the word “ramble”.

He said he has always been astonished by the fact that Belgium seems to have so little respect and recognition for writers who have stayed in Brussels and used it in their work (such as Charlotte Brontë). There is a plaque for Charlotte and Emily at the Palais des Beaux Arts, but it is high up on a wall and difficult to read.

Derek was wondering why foreigners would come to Brussels? In the old days, people fled their country because of debts, because they were poor, because they risked persecution, he said. He recalled the story of the Oscar ceremony in 2017 when the wrong movie was announced as Best Film. The writer of the script of the movie that won was afterwards asked where he wrote the screenplay and he replied: in Brussels. Why? Because it was a quiet place where nothing happened and where he could write while not being disturbed.

Derek said he has the impression that literature and film are not really high in the ranking of Arts in Brussels. He listed writers who have worked in Brussels but their Belgian connection gets little recognition: Eduard Douwes Dekker (whose pen name was Multatuli) wrote “Max Havelaar” in Brussels; Karl Marx started “The Communist Manifesto” in Brussels; Lord Byron stayed in Brussels; Victor Hugo came to Brussels several times; Joseph Conrad came to Brussels when took up a post for a Belgian company in Congo, which experience became the inspiration for “Heart of Darkness”. Brussels seems to have a long history of attracting writers but failing to recognize them properly, he said.

For Brontë fans, the biggest example is of course Charlotte Brontë. She came to Brussels to learn French with a view of opening a school in Haworth. Of all the options she had, she selected Brussels (one reason being that her friend Mary Taylor was already studying in Brussels). Charlotte did not flee her country for debts or persecution, but came to Belgium with a thirst to learn, to see, to experience. She called Belgium “my promised land”. She really made a case for Belgium and Brussels. Two of her books (“The Professor” and “Villette”) are set in Brussels and Belgium. Derek holds the view that Charlotte Brontë really deserves to have a statue in Brussels.

He recalled that the BBG has tried to get a statue of the Brontës in Brussels, but has so far been unsuccessful. An exhibition on the Brontës or other ideas are still a possibility. To be continued … all suggestions are welcome.

Derek ended his ramble by suggesting that another option to honour Charlotte Brontë and her relationship with Brussels would be that someone writes a screenplay for a film of “Villette”, perhaps in a quiet pub in Brussels, and gets it nominated for an Oscar as best foreign film –- can someone make this happen?  Who knows …