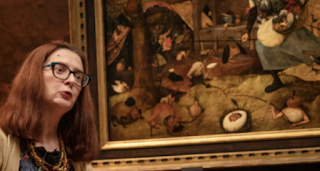 In her talk to the Brussels Brontë Group on Saturday 15 October 2022, Leen told us that “Belgian historiography” begins with Julius Caesar, who wrote about the connections between the regions that later became Belgium and Britain (as he was documenting conquering the peoples). The Druids in southern Britannia had frequent contact with the Druids in Gaul, she said, and there already was a lot of traffic across the channel in Caesar’s time. Leen then leapt ahead to the fifteenth century, when Margaret of York was instrumental in the publication of the first book printed in English, which was produced in Bruges in 1464. Margaret was the patron of William Caxton, who translated into English The Recuyell of the Historyes of Troye, French stories about the fall of Troy. She even edited Caxton’s text before publication, Leen said. “It sold quite well, too.”

Leen then told us how the Archduchess Isabella, co-ruler of this region when it was the Spanish Netherlands in the seventeenth century, employed the Flemish painter Peter Paul Rubens as a diplomat and spy. In the 1620s, Isabella sent Rubens to Madrid and London to help negotiate a peace treaty between Spain and England. He succeeded. “He must be the only painter in the history of art who brokered an important peace treaty between two major European countries,” she said. 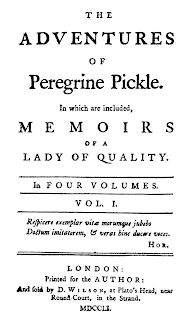 Speaking of Rubens, Leen recounted a funny scene in Tobias Smollett’s 1751 novel The Adventures of Peregrine Pickle that takes place during a visit to the tomb of the Flemish painter in Antwerp’s Church of St. James. Pickle goes with a pretentious painter named Pallet to Antwerp to see some works by Rubens, stopping in Brussels and Mechlin (Mechelen) along the way. Pallet believes he resembles Rubens in both skill and physiognomy, and in order to render the perceived physical similarity more striking, “he had, at one time of his life, resolved to keep his face sacred from the razor.”

Attempting to demonstrate the “extraordinary inspiration” he felt from Rubens, Pallet’s “whole behaviour was an affectation of rapture, expressed in distracted exclamations, convulsive starts, and uncouth gesticulations,” Smollett writes in the novel. Pallet ends up causing a stir among the friars and priests in the Antwerp church. He was “in danger of being very roughly handled by the crowd, had not Peregrine stepped in, and assured them, that he was a poor unhappy gentleman, who laboured under a transport of the brain,” the novel says.

One reader who we know appreciated Smollett’s comic scene in Antwerp was Lord Byron, Leen said. In an 1816 letter, Byron writes:

“At Antwerp we pictured – we churched – and we steepled again … as for Rubens – I was glad to see his tomb on account of that ridiculous description in Smollet’s Pickle of Pallet’s absurdity at his monument.”

Lord Byron goes on to give his verdict on Rubens:

“... but as for his works … he seems to me (who by the way know nothing of the matter) the most glaring – flaring – staring – harlotry impostor that ever passed a trick upon the senses of mankind – it is not nature – it is not art – with the exception of some linen (which hangs over the cross in one his pictures) which to do it justice looked like a very handsome table cloth – I never saw such an assemblage of florid nightmares as his canvas contains …”

Leen’s analysis: “Lord Byron and the art-historical Brexit – right there!”

Another Brit who wrote about Belgium was Henry Robert Addison, an army officer who published an 1843 guidebook titled Belgium as She Is. 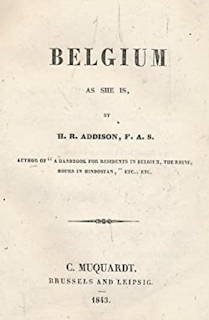 “A more strikingly handsome place, a more cheerful and inviting looking city, is not to be met with on the Continent of Europe. … Her wide streets and squares are airy and clean. Like Edinburgh, she is divided into two distinct towns – the old and new, the former is dirty and irregular as her prototype the capital of Scotland; the latter is handsome and picturesque …”

Leen noted that Addison’s guidebook was published while Charlotte Brontë was in Brussels; they might have seen each other on the streets.

“One of the nicest things, and one of the funniest things, in his book is that he included a Flemish vocabulary,” Leen said, “for those who had the misfortune of having to speak to a Flemish peasant.”

Leen quoted the text: “If you do not speak Flemish and meet with a peasant, speak English to him instead of French ... transpose the words, pronounce them in a broad Yorkshire dialect and you will make yourself understood.”

Charlotte could have benefited from that advice while she was in Belgium. But she did manage to pick up a little Flemish while she was here, Leen said, citing a letter to Laetitia Wheelwright in which she appends: Denk aan mij en ik zal aan jou denken. Je vriendin, Charlotte.

Leen said she found the Addison guidebook while writing her book titled Mijn België (My Belgium), which is set out alphabetically and can be described as an A-to-Z of Belgianness. The V section is on Villette.

Charlotte’s final novel is what Leen turned to next in her talk. She focused on Chapter 38 Cloud, when Lucy Snowe takes an opium-induced wander through Place Royale and into the Parc Bruxelles.

“Villette is one blaze, one broad illumination; the whole world seems abroad; moonlight and heaven are banished: the town, by her own flambeaux, beholds her own splendour — gay dresses, grand equipages, fine horses and gallant riders throng the bright streets. I see even scores of masks. It is a strange scene, stranger than dreams.”

“I had never read about the suffering of a female heroine in that way,” she said. 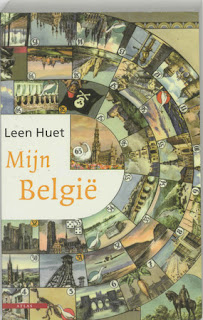