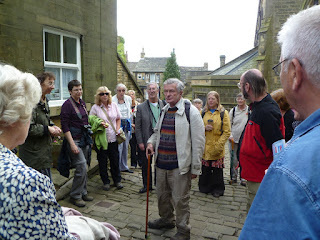 Ian Dewhirst leads a walk round the graveyards of Haworth
On Sunday 10 June one of the walks scheduled was the tour of Haworth graveyards with Ian Dewhirst (a local historian and a real Yorkshire man) as our guide. About 25 people met Ian near the Sunday school entrance and we started off first with the graveyard next to the church (which is the oldest graveyard of Haworth). Apart from the so-called Brontë graves (The Brown tombstone and Tabitha’s grave) we visited a number of very interesting graves, although sometimes very difficult to decipher (a brush would have been handy sometimes!).  In his very recognizable Yorkshire accent Ian had great stories to tell at a lot of these graves: the story of the Highwayman (James Sutcliffe), the story of the last hand-loom weaver (Timothy Feather), the story of the man lost at sea (Elkanah Merrell) and of the woman lost at sea (while on her way to seeking a new life in Australia – Elisabeth Hartley), the story of the assumed Haworth poisoner (John Sagar), the story of the honest gamekeeper (John William Moore) and many more. There were some very beautifully carved gravestones e.g. the gravestone with the stone infant laid with his head resting on a pillow (Heaton), or the musical gravestones with hymns carved in stone.

With half of our group left, we then set off on our way to the municipal Haworth graveyard (off the Stanbury road) where Ian showed us some more interesting (newer) graves: the grave of Lily Cove (the parachutist who crashed with her balloon in Haworth), the grave of Anita McCluskey (a BS Council member with a quote from Wuthering Heights on her gravestone), some beautiful war graves, some special children’s’ graves, a murder victim’s grave, gravestones with beautiful poetry,  etc….

We then continued our journey to the Baptist churchyards (near West Lane’s Baptist church): a little bit hidden away, but still worthwhile visiting (one grave was particularly remarkable in that it had a huge pint of stout on the gravestone: old Harry “the hat” Denton liked his pint in the Old Sun! and had it carved on his grave when he could no longer visit “The Sun”).

After approximately three hours of rummaging on graves we finally ended this very lively and interesting tour on West Lane where we said goodbye to our guide Ian. Since I read the book “Ghosts and Gravestones of Haworth” by Philip Lister I had been looking forward very much to this graveyard tour, and I must admit: I was certainly not disappointed. We could not have wished for a better guide than Ian. We were promised a treat and we definitely got one, and certainly one to my liking!! I thoroughly enjoyed it.