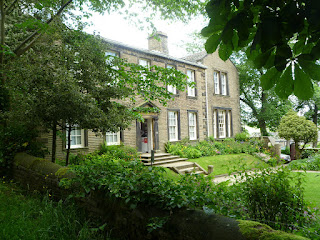 Eight members of the Brussels Brontë Group attended the Brontë Society weekend in Haworth this year and experienced the delights of a few days in Yorkshire. We ate too many cakes and meat pies. We filled our lungs with the bracing air of the moors. We experienced, too, the specific delights of the Brontë weekend. Such as encounters with friendly, talkative Society members sharing inside knowledge of local places with Brontë connections, and coach  excursions to some of these places, where we were ably guided.

Highlights included a surprise meeting with a Brontë descendant – for obvious reasons not descended directly from Patrick Brontë and his children, but from a sibling of Patrick’s – and a tour of Haddon Hall in Derbyshire where the 2011 film of Jane Eyre was shot.

The Brontë descendant was waiting for us in the parish church of Guiseley, now a suburb of Leeds, where Patrick and Maria Branwell were married in 1812. This lady had been unaware that she was a descendant of Patrick’s sister Sarah until a Brontë Society member (who was also present in the church to receive us) researched the link. We had our photos taken with her by Patrick and Maria’s marriage certificate.

From our guide at Haddon Hall, whose battlements have featured in many movies over the years, we heard stories of the making of the feature film of Jane Eyre last year and the BBC series starring Ruth Wilson in 2006. The tale, for example, of the fibreglass tree that was made at great expense for a particular scene, only to split in two in the wind on the night before the scene in question was filmed; and the calls made to the fire brigade because the special effects used for the shots of the Hall on fire were so realistic. 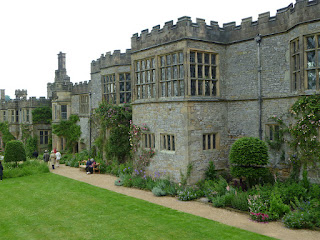 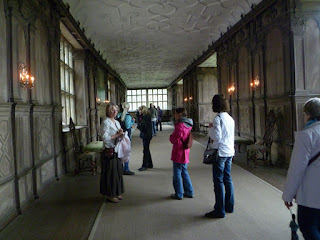 Group members in the long gallery at the Hall

Another enjoyable excursion was the one to Red House in Gomersal, the home of Charlotte’s schoolfriend Mary Taylor and now a museum. Mary and her sister Martha were at school in Brussels at the same time as Charlotte and Emily. Martha died of cholera while in Brussels and a member of the Brussels Brontë Group has been researching what happened to her grave when the old Protestant cemetery was closed. Red House and the Taylor family inspired “Briarmains” and the Yorkes in Charlotte’s novel Shirley, and the museum provided plenty of background to this novel of industrial unrest.

In Haworth itself, we had the usual varied programme of talks and entertainment. We saw a demonstration of 1830s costumes by the “History Wardrobe”; viewed a film on the question of whether Heathcliff - who was rescued from the streets of Liverpool, a centre of the slave trade – could have been black, a theme that ties in with the recent Wuthering Heights film; and enjoyed entertainment over dinner at a local hostelry. 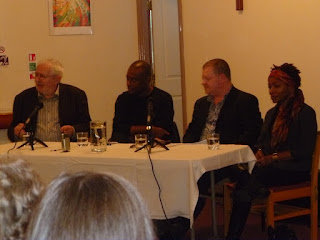 On the panel to discuss the film “A Regular Black: the Hidden Wuthering Heights”
were Terry Eagleton (far left), Caryl Philips (second from left)
and Bonnie Greer, President of the Brontë Society (on the right)

A Brontë weekend in Haworth would not be complete without a graveyard tour and the numerous ghost stories told each evening in the pub. Every inn in the village has its haunted room, whether or not connected with the Brontës, and we were given copies of a novel whose narrator is the spirit of Charlotte Brontë interacting with modern-day inhabitants of Haworth; its author claims to have written it at her dictation… If any of the Brontës’ ghosts were present at the weekend’s events I hope they enjoyed them as much as we did.


Photos by Marina Saegerman
Posted by Helen at Thursday, June 21, 2012