I finally made it to Haworth to attend the Brontë AGM after many years of wanting to do so. All in all, it was not unlike how I had imagined it would be; a small village on a hill surrounded by the moors. However, the Brontë Parsonage was somehow bigger than I expected (although for the family themselves given the ladies’ fashions of the day, space must have been tight!). The Brontë Parsonage Museum is partly manned by volunteers who did not disappoint in their dedication and friendliness. Predictably too, Haworth is packed with Bed and Breakfasts; ye Olde Teashops and so on. Nonetheless, a suggestion of tweeness is effectively counteracted by the weight of the history of Brontë family; and the magnificence of the moors. A wide variety of accommodation is on offer (in some cases at top prices) by the locals in the absence- thank goodness - of modern hotel chains. Great efforts are made to create an old world atmosphere in line with the Brontë story. Especially the standard of breakfasts and bakery is high (waist watchers be warned); although the tidying up of bathrooms seemed somewhat erratic; endless supplies of fresh towels either piled high on the bed or in definitely twee baskets did not address this issue.

What I saw of the surrounding moors while green and lovely was much less wild than I had expected (not at all suitable for Cathy and Heathcliff’s ghosts.) But time for rambling was limited due to the busy academic programme on offer. While packed with interesting speakers the connection with the Brontës was at best tenuous in many cases. The showing of the documentary film led to a passionate but ultimately inconclusive debate as to whether Heathcliff was Irish or black Caribbean – the jury is still out on  this one and likely to remain so! A further surprise was the existence of two Haworths – upper and lower – connected by a beautiful and somewhat empty park and a steep hill.

Apart from the moors, Patrick Brontë remained a dominant – one has to say - presence. Over the weekend, one becomes quickly reacquainted with his strong personality; the many tragic aspects of his life; and his energetic commitment to carrying out his pastoral ministry including as Vicar of Haworth, against the background of the lively theological debates raging at the time. Some might   wonder then that the summing up accolade paid to him in the parish church in Haworth in the ceremony to celebrate the 200th anniversary of his marriage to Maria Branwell as well as his Faith, was that  Patrick Brontë was a great British hero - (Oh well; it is the Jubilee  Year!!)

Again, it was a Patrick Brontë connection which provided perhaps the most special feature of the weekend. A visit to nearby Guiseley Church to view the marriage certificate also provided the opportunity to meet a real live Patrick Brontë relation through his sister. Carol was sitting in the Church quietly waiting for us and seemed pleased if somewhat bemused as Brontë enthusiasts eagerly quizzed her on the connection dating back 200 years, about which she had herself learnt only recently! Even an actual family resemblance was not ruled out!! 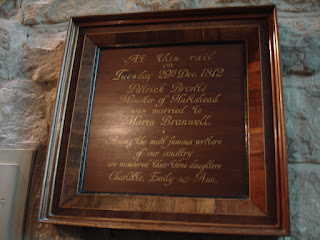