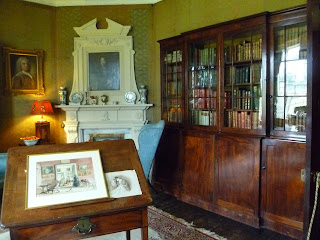 The house is a real marvel, so lovingly and passionately restored to its original grandeur, with great attention to detail, but there is still a lot of work to be done. I was in awe when I finished the tour. The house has indeed a special friendly, welcoming atmosphere, which according to Sir James “results from its having belonged to the same family for 392 years”. Personally I think it is also the result of the passion and dedication with which the current owners have restored and taken care of the house. You can definitely see and feel this passion in every room you visit. And some hard work has gone into the restoration, for sure!  Thanks are due to Sir James and Lady Graham for saving this fascinating historic gem for generations to come.


We still had to visit the walled garden and the stable block which is also a Grade II-listed building (as is the house). The walled garden is five minutes’ walk from the house. It covers over three acres and was designed in the mid-18th century. It still retains the essential features of the original design: two paths meeting at the central feature (the Orangery), flanked by greenhouses, with a small ornamental pond before it and colourful flower and herbaceous borders everywhere in the garden. It gives the visitor this feeling of utter tranquility, which we all need once in a while in our busy lives!
What a perfect way of ending this extraordinary visit!
And, for those unmarried souls amongst us, a special message:  Reader, you can marry here!
(Norton Conyers is indeed a wonderful venue for weddings and other celebrations/events!)