Another place we had to see (and Brontë-related) was Cuba Court (or what is left of it!). We met up with Fay and she directed us to the site of Cuba Court (only the gate and a small part of a building are left of that grand house). Arthur Bell Nicholls grew up here (his uncle was headmaster of the Royal School situated at Cuba Court) and it was the place where he took Charlotte on their honeymoon to meet his relatives. Charlotte was very impressed with the house (and the family) and  her first impressions of Cuba Court are recorded in one of her letters to Miss Wooler.

We also visited Arthur’s grave again (an absolute must for Brontë fans) and put some heather plants on the grave. I noticed also that on the wall near the grave a new information board on Charlotte and Arthur had been placed. This had been done in April 2016 to commemorate the bicentenary of Charlotte’s birth. Another board (about Arthur and Banagher) was put on the fence at the B&B.


Fay also invited us to the St. Paul’s community Sunday barbecue, which was a fundraising event for the church. This would take place after the Church service, which I planned to attend. I am not an Anglican, but I wanted to have a feeling of how Arthur would have experienced community life in Banagher (or even in Haworth) and a church service in St. Paul’s could give me an idea. And going to the community barbecue seemed like fun to us (and we had to eat something anyway). So, the plans for Sunday were made.

The only thing left to do on Saturday was checking in in the B&B, that fabulous house that I remembered from 3 years ago. Nicola had put us in the “famous” attic room (also known as the Honeymoon suite) where Arthur had stored all the memorabilia of Charlotte and her sisters. I just enjoyed wandering around in the lounge and the dining room, just trying to feel Arthur’s presence. An open fire was on in the evening, and that made the room very cosy indeed!


Next morning I went to the church around 10.45, with a quick visit first to the graveyard (again). I was the first to arrive in church and had some time to admire the beautiful glass stained windows.
I decided to sit “invisibly” at the back of the church to witness and experience the service from a distance. The vicar saw me sitting there, and as I was unknown to him (not being part of the regular church going community) he welcomed me to the church and explained that it was not going to be a regular service, but only prayers, readings and hymns. I told him I was not of the Anglican faith and was only interested in the Brontë link. Sitting invisibly at the back of the church was apparently not going to happen. Nearly everyone that attended the service, started occupying the back seats around me, so I was not really “invisible”. It was a serene service, with many humorous notes by the vicar (not something I could envisage being done by a catholic priest!). But I enjoyed it, and the vicar explained afterwards that this would have been how Arthur and the rev. Patrick Brontë experienced their pastoral duties and life in their community. All church-goers went straight to  St. Paul’s community Hall for the barbecue. I first went to collect my hubbie at the B&B, and then we also joined the barbecue. A lot of eating, drinking tea, chatting, laughing was going on at the hall. At first we felt a bit excluded, knowing no one (apart from Fay who was busy with the organisation), but eventually we started talking to some of the locals and we really enjoyed ourselves. There was a also raffle organised to raise funds for the church, and the vicar was leading the ceremony with a cook’s hat on. Very funny sight indeed! We did not win anything, but we had a jolly good time. 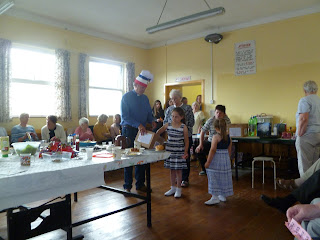 As we had seen all the Brontë-related sites in Banagher, we decided to take the car and tour in the area surrounding Banagher. It really is a beautiful countryside (mostly bog land), with the Shannon always nearby. We visited Clonmacnoise, one the oldest and most famous monastic sites in Ireland (with lots of tourists visiting), and Clonfert cathedral (unfortunately not open to the public that day).
We ended the day in a pub for a meal, a nice pint of Guinness and a lovely chat with Fay.

Our holidays in Ireland were sadly nearing the end, but it really ended on a “Brontë” high. On our last evening in Ireland we were invited by Monica Wallace and her husband Peter for a meal and a chat at their home in Glenageary, near Dun Laoghaire (Dublin). We were staying in a B&B nearby. Monica is a member of the Brussels Brontë group but returned to Ireland recently. She is preparing a talk for the BBG in October on Charlotte and Arthur’s honeymoon trip in Ireland, which is of course also one of my interests. So, we certainly had a lot to talk about. It was so  nice to visit her and meet her husband. She had also invited  another Irish member of the Brussels Brontë group, who had recently returned to Ireland and whom she had met accidentally in Dublin. This meant, of course, that Brontë was never far away as a topic. But, as we also had two husbands present (non-Brontë persons) other topics came up in the conversation: from Ireland in general, the regions we visited and the Irish language to (believe it or not) celebrities living nearby (Maeve Binchy, Enya and Chris de Burgh as my personal favourite being amongst them).  The evening turned out to be just lovely: Monica prepared a wonderful homemade Irish meal with all the trimmings, which we all really enjoyed. And her homemade elderflower cordial was a real treat for me! What a nice ending to our holidays!

The next day we left Ireland (as always with tears in our eyes) with the ferry from Dublin to Holyhead and we were heading for North Yorkshire, where the Brontë story was to be continued. But more about that in a separate report.